Home page Dtek`s experts about reform Learning from Mistakes: How Not to Reform the Power Industry

Learning from Mistakes: How Not to Reform the Power Industry

The world's most vivid failures as a lesson for Ukraine The world's most vivid failures as a lesson for Ukraine

The reform of the power market under way in Ukraine is not a matter of national expertise. Power market liberalization is a global trend, one of the most important elements of the structural transformation of advanced economies. The reform, in and of itself, is a good thing. However, for Ukraine, there are risks that it will be implemented "as usual"; that is, it will end up far from the initial goals and will lead to undesirable consequences.

Unfortunately, such fears are justified. There are many examples of failed power market reforms in world history, when good goals (increased trader activity, increased trading volumes, decreased margins for suppliers and, accordingly, prices for consumers) led to the opposite results (power shortages, lack of investments, higher prices). As a result, the authorities have either altered the basic strategy or resigned themselves to failure and completely abandoned the idea of reform.

Since the reform of the Ukrainian power market is just getting going, Mind asked an expert to talk about the most negative experiences and typical mistakes a number of countries made while transforming their power markets.Danil Babkov, the manager of the Analytics Department of DTEK Energo's Directorate for Commercial Activities, gave examples of the most significant failures in the world power industry.

What is openness for national energy markets? Until the 1980s and '90s, most countries considered power industries with a vertically integrated structure to be natural monopolies. Tariffs were strictly controlled by the government. But because of increased fuel costs, the slow pace of modernization, and fast-growing demand for power, this system seemed ineffective. Many countries began to look for new approaches, and most of them chose one that involved dividing monopolies into several companies capable of competing, as well as giving new producers access to the market. Today it is common to think in terms of four models (levels) of industry management:

1. Regulated natural monopoly. A standard vertically integrated structure. One company, thanks to the positive effect of "economies of scale," can supply commodities to consumers at lower costs (prices).

2. Single-buyer (Ukraine's current system). In this model, only manufacturers compete with each other. The generation sector is divided among many independent companies that compete to supply power to a single buyer acting on behalf of the state. With respect to the consumer, the same monopoly supply system as in the first model is used.

3. Competition in the wholesale market. A wholesale power market is established, the regulation of wholesale prices is discontinued, producers negotiate directly with companies that are the exclusive suppliers of consumers in their territories.

4. Competition in wholesale and retail markets. Building on the third model, the division of the market also takes place in the field of consumer-facing power distribution and marketing. Distribution companies are controlled as territorial natural monopolies, and many independent suppliers appear instead of a single sales company. Retail markets are created where sales companies and consumers compete, and the regulation of retail prices is discontinued.

Today, the degree of openness of national power markets is as follows: 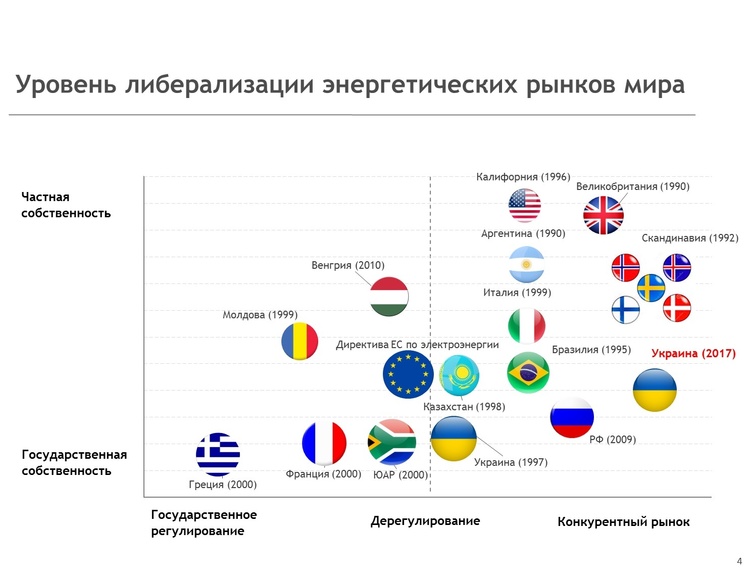 The vertical scale shows the form of ownership of power companies (the higher you go, the greater the number of private players).

Our first example of the introduction of a new market environment and the risks associated with it: the situation that arose in California's power industry in the early 2000s. The USA is a federation, so there are states that maintain a high level of state regulation of the power industry (the majority), as well as states with liberalized markets.

California belongs to the second group. Since 1996, this state started implementing a plan for deregulating the power industry similar to  Ukraine's. The plan was to abolish the so-called "last regulated monopoly" – the power supply system in the United States – and to allow consumers to choose from several suppliers.

First, the Commission ordered reducing power prices by 10% in the retail market, where there were still regulatory prices, and freezing them for five years. However, soon after, factors began to emerge that enabled power producers to raise wholesale prices:

Thus, generating companies (especially Enron) were given a free hand to sharply increase supply prices in the spot market. Thus, the wholesale price of power, which had been 5 cents per kWh in January 2000, increased eight times over by July.

Producers' profits reached 350%! And when speculators deliberately inflated prices in the wholesale market, retail prices remained at the level fixed by the regulator. In the end, utility companies (suppliers) were unable to buy electricity from power plants at speculative prices and deliver it to consumers.

It was a real crisis: consumers in the state experienced a series of rolling blackouts, and power supply companies in California lost about $400 million. Eventually, the state government decided to suspend the reforms, impose penalties on generating companies, and return to the regulatory model.

California's experience showed that a situation where the wholesale market is deregulated and prices are volatile while the retail market is forced to set a maximum price can be extremely dangerous for all market participants and consumers. In this case, the main mistake was an unsynchronized transition to market relations in the wholesale and retail power markets.

By the way, today a similar situation can be observed in Ukraine, where the tariff for household consumers does not depend on market pricing and is not economically justified. As household consumers, we pay about 70% of the actual tariff. The so-called "cross-subsidy" mechanism should be abolished before the transition to the new market model. Otherwise, it will lead to increased risks for the market.

"There is no country more beautiful than Chile …"

Chile was one of the first countries to begin transforming its power industry by establishing competitive wholesale and retail markets (1982). For more than ten years, the reform was quite successful: prices for consumers decreased, and the efficiency of production grew thanks to the inflow of investments. With respect to the development of generating facilities, preference was given to CCGTs using cheap gas imported from Argentina.

The situation changed in 2004, when Argentina revised its gas export policy and raised prices. The construction of new gas TPPs in Chile was suspended because even existing plants couldn't get enough fuel. Alternative raw materials for power generation, such as liquefied gas and coal, were expensive and required time for logistics to be organized.

The increase in power consumption due to the development of Chile's economy led to a shortage of generating capacity and, consequently, to an increase in market prices. Chile's government was forced to change the strategy of the reforms and return to state regulation of the market and bilateral contracts. To this day, contracts are concluded through tenders held by the regulator.

The availability of spot power markets didn't guarantee sustainable "signals" for the modernization of the country's energy complex as a whole. In addition, the development of generating capacity in Chile happened through small private TPPs, while natural gas remained relatively cheap.

This shows that the development of infrastructure, primarily through long-term planning in key areas, the balance of intersystem links, and the promotion of private investment should be monitored by the regulator and the relevant ministry, which should introduce preventive measures in case crisis situations arise.

In the early 1990s, Argentina experience a rapid economic recovery took place, partly due to large-scale market-oriented reforms. The new winds also blew through the power industry. The essence of the reforms in Argentina was the division of state monopolies (vertically integrated companies) and the subsequent privatization or transfer of assets under concession contracts.

Initially, this reform showed such good results that it was considered exemplary. In eight years (1993-2001), generating capacity (gas turbine plants) increased by 25%, and wholesale prices fell by half. This was while power consumption was growing at a rate of 7% per year!

The situation changed at the end of 2001 because of the severe political and economic crisis in the country. The value of the national currency fell three times against the dollar. And given the fact that prices under contracts with foreign manufacturers were in dollars, this threatened to lead to a manifold increase in retail prices for consumers.

The government was forced to restore a top-down model and abandon the competitive market. Investments in private generation also dried up, and the state-owned ENARSA took over responsibility for the energy sector development strategy.

As in Chile, monitoring and forecasting of the energy balance is supposed to be the responsibility of state-owned or independent regulators. The settlement system's degree of reliability/vulnerability and the growth of the financial burden on the consumer also supposed to be monitored. When necessary, the responsible commission is supposed to propose and implement targeted programs to mitigate possible risks.

What can we conclude?

In each of the places we've looked at, the first stage after the implementation of reforms was quite trouble-free. There were no cataclysms in the market, and the reforms gave the necessary results.

However, when crises arose, local regulators resorted to their usual tool – the top-down model. In the best case, the government suspended the reform indefinitely and revised the strategy; in the worst, the competitive market was simply abandoned. The government came to the conclusion that only a single-buyer model such as the one in Ukraine was appropriate.

In these countries, crises became a stimulus for the development of a systematic approach to managing the power sector, which Ukraine must now take advantage of. The main postulates of that approach are as follows:

§  Popularization/awareness-raising. For the kind of maximum liberalization planned in Ukraine, where consumers play a key role, the experience of Pennsylvania could be useful. The state's energy commission initiated special programs to train consumers to choose from among alternative power producers, conducted an advertising campaign, and explained the advantages of choosing producers on a competitive basis.

§  Planning. The creation of a regulator whose functions should include planning the integrated development of the grid, taking into account (among other things) the compatibility of the Ukrainian market model with the models in neighboring countries.